It is 12 months since the book William Doyle and I wrote was published in the United States. It has been a hard-to-get item in much of the rest of the world due to publishing rights and more recently because the restrictions caused by the pandemic.

The book has received positive reviews in the American Journal of Play and in the Youth Today. In the Library Journal Elizabeth Safford wrote: 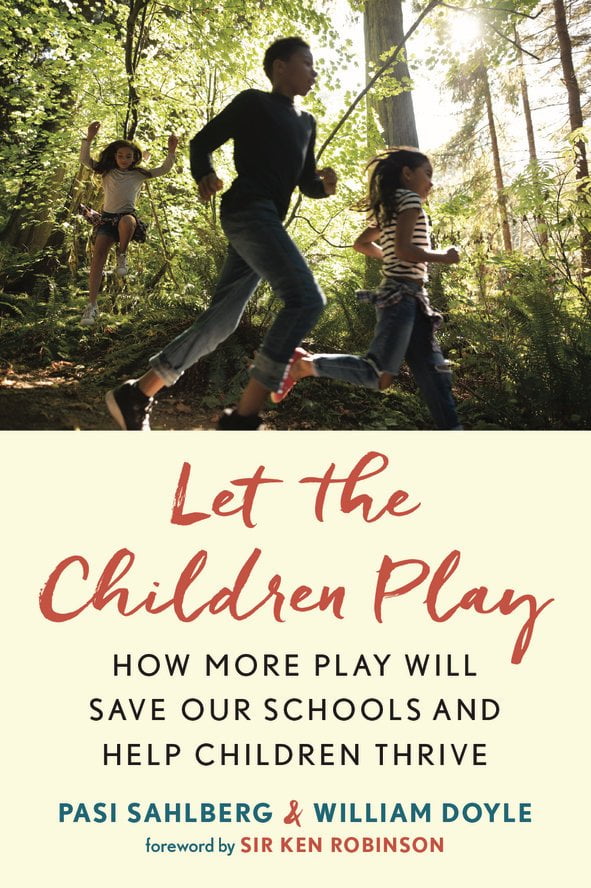 “Finnish educator Sahlberg and TV producer and author Doyle, both parents of young children, focus on the importance of play: specifically, self-directed outdoor play. The verdict is in: the American Academy of Pediatrics strongly encourages play in schools and states that “The lifelong success of children is based on their ability to be creative and to apply the lessons learned from playing.” The authors look at play-based experiments all over the globe, including “Anji Play,” an experiment in play taking place in China’s preschools, and Finland’s educational system, which stresses play and is considered to be among the best in the world. They conclude that play deprivation is the result of colossal governmental mismanagement. The culprit is the Global Education Reform Movement, which favors academic performance, as measured by standardized testing, over children’s engagement and well-being. Each of the last three presidential administrations is guilty of pushing standardized testing over respect for individual growth and strength. This insightful work concludes with ideas for change, emphasizing the joy children feel when they’re allowed to play and the tension and unhappiness that ensue when their days are filled with preparation for standardized testing. Verdict:  An excellent offering for parent activists, education students, and school administrators.”

In a review in the ICASE Newsletter 39(1) Yael Sharan writes:

“If you or anyone you know may have any doubts about the value of play in a child’s life, reading Let the Children Play, co-authored by Pasi Sahlberg and William Doyle, will obliterate these doubts from your mind. Over 400 pages are devoted to explaining and documenting the indisputable contribution of play to the spiritual, psychological, and intellectual life of children. Like assiduous lawyers, the authors back up their belief by citing innumerable ‘witnesses for the defense’: their personal and others’ experience as children and as parents, what they learned from countless visits to schools around the world, from interviews with numerous educators at all levels, as well as from pediatricians and researchers. Towards the end of the book they offer additional testimonies to the value of play in school from an international panel of experts.”

Now, Let the Children Play will be available around the world through Oxford University Press‘s global network. We believe the book is more timely now than ever. The global COVID-19 pandemic has increased social isolation and loneliness among children and let many parents to wonder what might be an effective way to help children in need. In this book we offer a commonsense cure that we think is also the fastest and cheapest way to positively affect children’s wellbeing, happiness and learning – more high quality play. In our book we explain in detail what makes high quality play, why it should be seen as important than academic study in children’s lives, and what are the evidence-based benefits of play.

International edition of Let the Children Play is available on 29th October 2020.